Bitcoin (BTC) just broke past $9,000 at 3.30am UTC. The price recovery far outpaces the Dow Jones Industrial Average, or Dow, one of the mainstream market’s key barometers.

Bitcoin is once again the best performing asset in 2020.

It’s official. #Bitcoin is the best performing asset of the year (& decade) 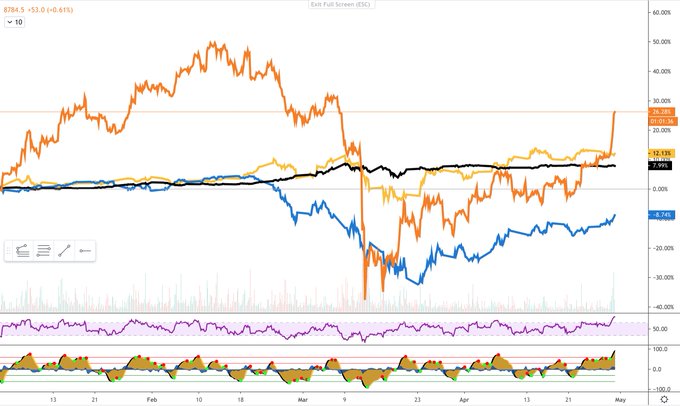 173 people are talking about this

U.S. coronavirus prevention measures took over during the first half of March as businesses closed and citizens stayed home ‘sheltering in place’. Bitcoin plummeted more than 50% between March 12 and 13, shooting down near $3,850 on some exchanges

Meanwhile, mainstream markets also dropped massively, including a 10% dive from the Dow. The Dow continued posting a number of subsequent red days following March 12, reaching its most recent bottom on March 23.

In contrast, March 13 proved itself as the most recent bottom for BTC. The asset has carved out a nice recovery since.

The halving news could also be at play

As mainstream and crypto markets continue recovering, there’s one fundamental driver that may be at the helm of Bitcoins drastic upward thrust — the coin’s block reward halving.

Occurring only every four years, Bitcoin’s halving cuts its inflationary supply in half, essentially leading to less new BTC regularly entering into circulation.

Many experts have weighed in on the topic in recent weeks, with some explaining the event might not play out the same as previous halvings. Only time will tell.