Each time Bitcoin (BTC) rallies past the all-important $10,000 mark, analysts seek to attribute the rise to major events occurring across the industry. The crypto sector is young, volatile and one major announcement can send ripples across the market.

In recent weeks, the market was on a downward trend, but a number of major occurrences have lifted the spirits of the industry participants. Bakkt, a company that focuses on driving institutional investment in crypto, has long been hyped as playing an important role in impacting market valuations.

But Bakkt’s product launches have not always matched up with its reputation. Back in September, the company launched a much-vaunted futures platform. Regardless of hype from the community and analysts alike, the project saw just 71 BTC (about $700,000 at the time), paltry figures for a project that was touted as a favorite to draw in serious institutional investment. Since the muted launch of the futures platform, volumes have grown, with two notable spikes during the last week.

Bull in the China shop

Chinese President Xi Jinping’s call for blockchain innovation to be accelerated in the country has seemingly zapped a languishing market back into action. Bitcoin immediately shot up to over $10,500 and many altcoins rode the wave firmly back into the green.

Many crypto platforms experienced a boost in volume, and Bakkt was no different. According to data from the Twitter-based monitoring resource Bakkt Volume Bot, Bakkt traded 1,183 Bitcoin ($11 million) futures on Friday.

Since the launch of the futures platform, volumes have mostly been well below $1 million a day. The massive spike in trading was a 257% increase on the previous jump, a record that had only recently been set at 441 BTC futures contracts ($4.8 million) on Oct. 23. At press time, the total volume is over 616 traded contracts, down 48% on the previous day of trading: 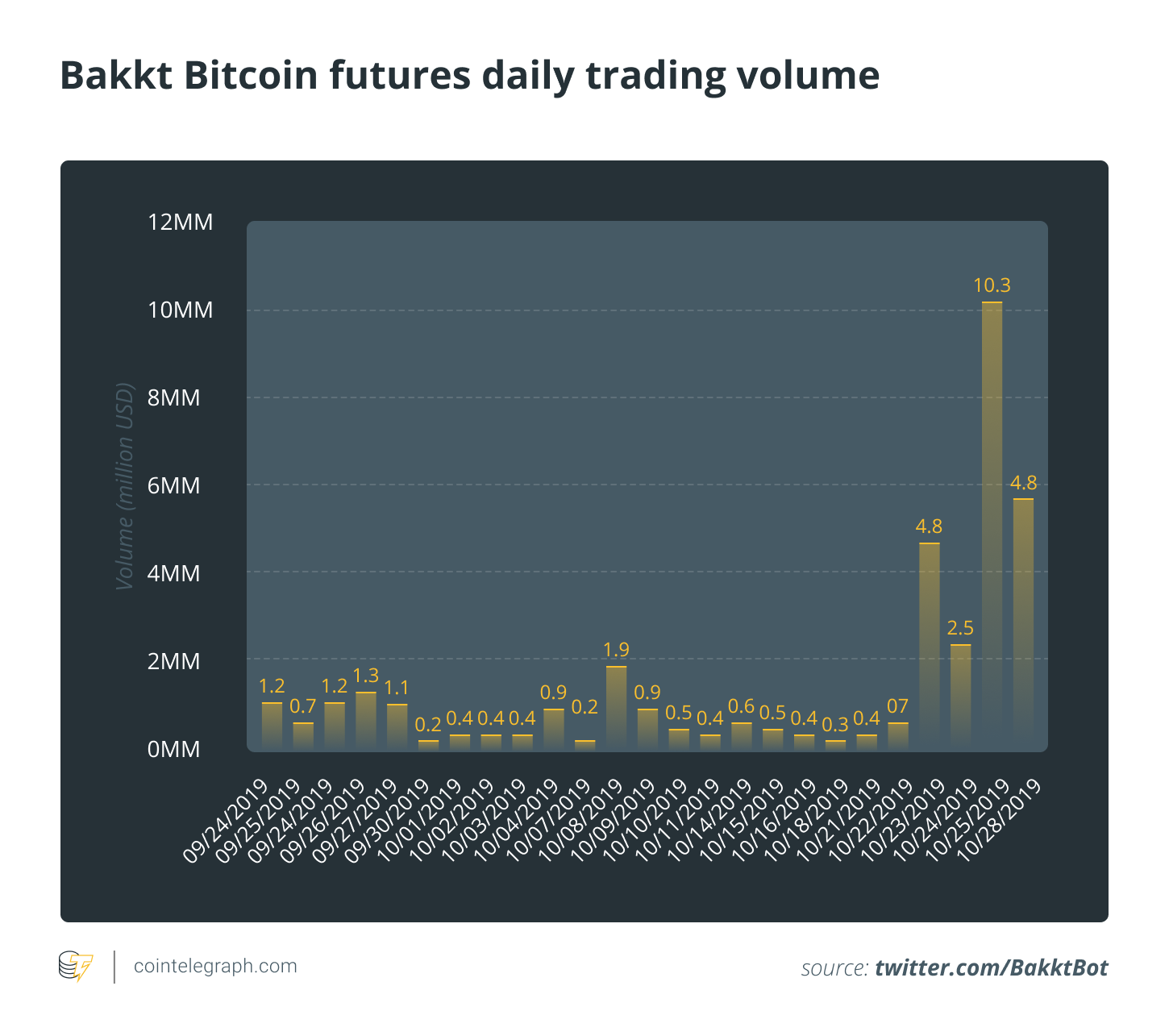 As the volumes on Bakkt’s futures platform grow, the firm announced on Oct. 24 that it would launch the first regulated options contracts for Bitcoin on Dec. 9. In a press release, Bakkt announced the options contracts would comprise of capital efficiency, cash or physical settlement, low fees and European-style options.

The firm also said an in-built messaging service would allow traders to communicate while carrying out block trades, options and analytics. Although the options service will launch fee-free, Bakkt will begin charging $1.25 per contract from January 2020. Omar Bham, a content creator and frequent commentator on developments across the industry, explained to Cointelegraph why options are considered a fairly safe bet for investors in comparison to futures:

“They allow speculators to have the ‘option,’ but not obligation to finalize an expected short or long position (call/put). Futures payout gains/losses daily, and can hurt of certain positions are held. Options really only hurt traders via whatever they paid for the contract premium (price of opening the contract). Options will attract a whole other mature class of speculators to BAKKT, which could drive much more volume to the platform.”

Bham told Cointelegraph that Bakkt’s options service could further increase institutional investment in cryptocurrency, “As BAKKT caters to institutional players with big capital, increased volume from options should beget even more volume, as the platforms credibility grows.” He went on to add that because Bakkt requires BTC for settlements, it could drive the demand for crypto.

While many analysts were initially disappointed by Bakkt’s early BTC futures volumes, Bham outlined his view to Cointelegraph that both platforms will grow organically over time:

“BAKKT will continue to become an institutional household name, due to their association with ICE. As volumes grow, this will expedite even faster future growth.”

Prominent crypto analyst on Twitter “Dave the Wave” also told Cointelegraph that Bakkt’s options launch would funnel more institutional money into crypto markets. The analyst explained that the boost in liquidity could reduce volatility, leading to an eventual rise in prices.

“In the short term, while we’re optimistic and we see greater and quicker utility than was the case for the monthly futures release, we suspect that the markets still have September’s lesson in memory and that it will be unlikely to move the needle either way.”

While Edwards takes a dim view of the service that Bakkt is currently offering, he admitted that the discrepancy in volumes since the platform’s launch could come down to low usage from day traders, adding that, “What Bakkt currently offers in terms of its futures product does not provide game-changing utility.”

For Edwards, although the ripples from the Chinese government’s shift on blockchain might have had an immediate effect, it could be unwise to assume that institutional investment will be similarly impacted:

“We are taking a wait-and-see approach here, and would caution against assuming too much too quickly. The real implications for development are more likely going to be felt in the 1–3 year timespan than right away; we see it as fairly neutral for institutional interest in the short term.”

Bakkt pairs up with Starbucks

Although most of Bakkt’s commercial services have targeted institutional investment, the firm announced its entrance into the mobile payments sector with a new app-based project. Building on the momentum of the record volumes witnessed in its Bitcoin futures platform, the company announced in an Oct. 28 blog post that it would launch an app to help customers “unlock the value of digital assets.”

Thin on substance but big on ambition, the announcement revealed that the coffee behemoth Starbucks would accept digital payments in its stores. Starbucks’ vice president of partnerships and payments, Maria Smith, said:

“Starbucks will play a pivotal role in developing practical, trusted and regulated applications for consumers to convert their digital assets into US dollars for use at Starbucks.”

It remains unclear exactly how Bakkt will exchange digital assets into USD at points-of-sale. Smith indicated that the system for Starbucks Rewards, which has around 15 million members, could serve as a template for the payments scheme. Mike Novogratz, head of cryptocurrency merchant bank Digital Galaxy, tweeted his view that the venture from Bakkt and Starbucks is a sign that crypto acceptance is just around the corner:

“Follow this space. I.e., this is a big deal. Crypto acceptance is coming. Bakkt to launch consumer app in the first half of 2020; will test product with Starbucks.”

Joe Weisenthal, editor of Bloomberg Business and prominent finance commentator, criticized Novogratz’s tweet, commenting that coffee can already be bought with a wide range of payment systems and that the introduction of a crypto option was unlikely to change anything, saying: “I disagree. It is incredibly easy to buy coffee these days with a range of payment systems, and I can’t fathom how or why a crypto-based system will improve anything.”