Physical delivery of Bitcoin (BTC) for futures on the Intercontinental Exchange (ICE)’s Bakkt platform is going strong, despite a tumultuous month for the markets.

Data from Arcane Research posted on March 26 reveals that, as of March 20, the number of traders opting to receive physical delivery of the cryptocurrency rose 44% on the month. 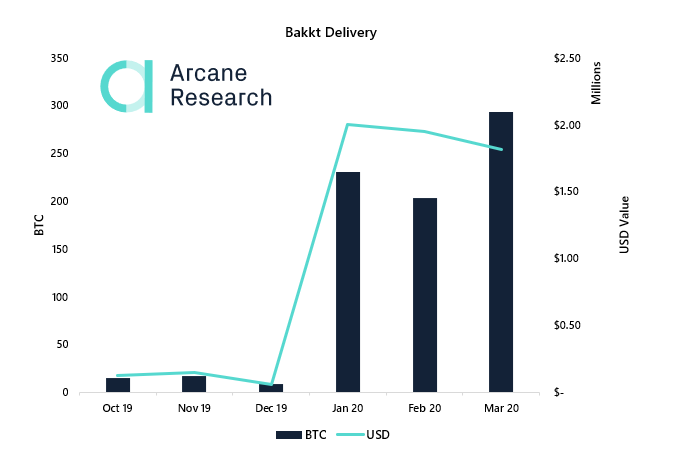 Bakkt’s Bitcoin futures contracts — the first of their kind to be physically settled in Bitcoin — first went live in September 2019. At the time, many commentators stated that physically-delivered Bitcoin futures trading, which gives traders direct exposure to the asset, would represent a leap forward for the institutional acceptance of the coin.

Notably, while physical delivery of Bitcoin upon contract expiry has significantly increased, other metrics for Bakkt in March — the volume of traded contracts and open interest — are both significantly down.

According to tracking data compiled by Twitter account Bakkt Volume Bot (@BakktBot) — which is not affiliated with Bakkt but rather with the Dutch journalist and crypto author Gert-Jan Lasterie — the volume of traded contracts on Bakkt on March 25 was at 1,161 ($7.73 million), down from an all-time high of 6,601 on Dec. 18, 2019. Open interest was at $4.16 million.

As global markets analyst and trader Alex Krüger has previously noted, the number of traders opting for physical delivery had been underwhelming in the first months since the Bakkt contract’s launch. In late November 2019, he said:

“Bakkt has bitcoin bulls excited. Volume is growing exponentially. From a low base, but growing fast nonetheless. But what makes Bakkt special for bulls is not its volume, but how many bitcoins are physically delivered. In November, the number was 17 bitcoins. In October, 15.”

In a subsequent tweet, Krüger argued that in fall 2019, Bakkt activity was “not that different from the CME. It is almost entirely paper trading” — a reference to the cash-settled Bitcoin futures on CME, which first launched back in winter 2017.

By December 2019, Krüger was observing that “almost nobody takes physical delivery,” adding: “this is not a problem. It is normal for futures traders to not take delivery, in all assets. But Bakkt is no panacea.”

The alternatives to physical delivery are choosing to roll over a contract, prolonging price speculation on the underlying asset.

In the case of CME’s cash-settled Bitcoin futures, their trading has historically drawn suspicion, with some claiming that Bitcoin’s price is vulnerable to manipulation in advance of contract settlements.

In December 2019, Bakkt officially confirmed its own launch of a cash-settled Bitcoin futures contract via ICE Futures Singapore.