The tweet in question was allegedly circulated through Bloomberg’s Twitter network “TicToc” on Oct. 11, and was reposted as a screenshot to Redditor u/Alexsayzz’s thread titled “Anti-crypto propaganda… promoted by American Express,” which has had 4,100 upvotes and drawn 437 comments as of press time.

As the screenshot reproduced below indicates, the tweet appears to have the hallmarks of a promoted post, and is recorded as having 42,000 views at the time the screenshot was taken. 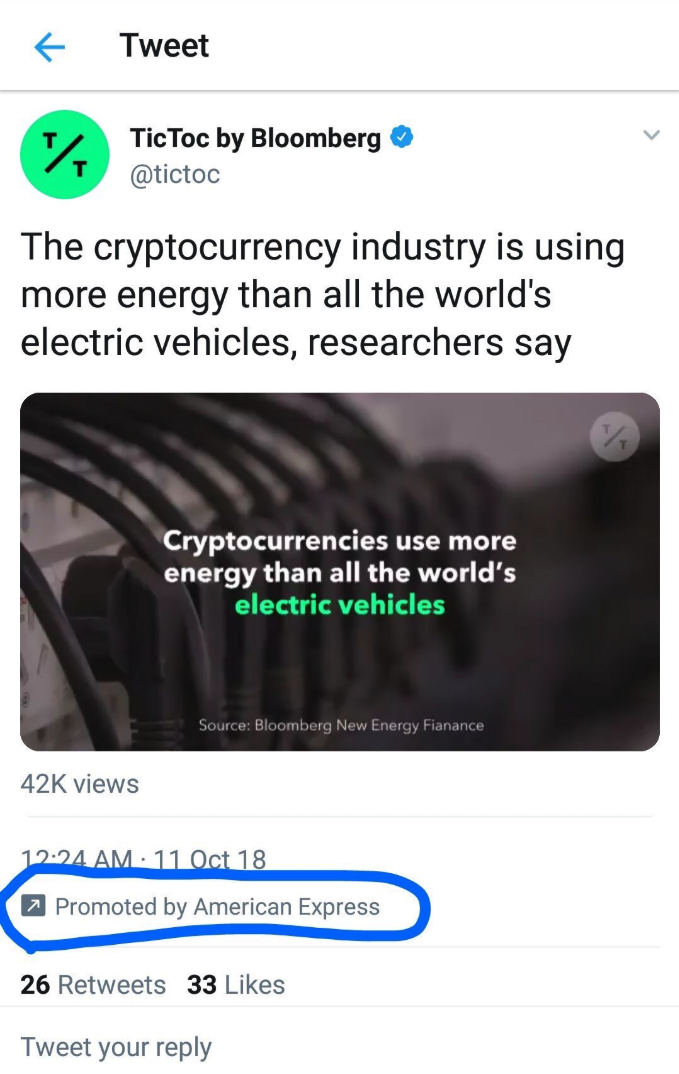 The tweet plays into the notion that the high amounts of energy needed to power the mining of cryptocurrencies such as Bitcoin (BTC) is the coin’s “achilles heel” — a long-standing, if frequently contested, argument.

Titled “Crypto’s Hidden Costs,” the piece covers the controversial energy-intensive Bitcoin (BTC) mining process. It frames two interviews with figures from the blockchain space, who give their opposing views as to the benefits of using clean energy to fuel crypto mining.

The tweet’s alleged promotion by a major card payments industry player such as Amex has been lambasted as “propaganda” by the thread’s contributors, who view Amex’s position as being in direct competition with the emerging cryptocurrency sector, and therefore as having an arguably vested interest in promoting crypto-skeptical content.

A tweet containing the same multimedia article is still to be found on the TicToc feed here, dated Oct. 10, but without the “promoted by American Express” included.

However, an anonymous source at Twitter has confirmed that the tweet in question was indeed promoted for some period, although they could not identify the sponsor.

The tweet may have been deleted, or that Twitter’s transparency tool for promoted content may be unreliable and fail to comprehensively retrieve all tweets.

Another possibility is that the Redditor’s image was fabricated to create the false impression that Amex has been involved in the promotion of anti-crypto material, in an attempt to quash competition from the emerging sector.

In June, the temporary failure of Visa’s transaction service in Europe — a competitor for MasterCard — highlighted the 99.98 percent functionality of Bitcoin’s decentralized network since its inception on Jan. 3, 2009.

Cryptocurrencies and advertising have sparked controversy in the past, notably with tech giants’ bans on crypto-related advertising. Google, Facebook and Twitter have all in the past banned crypto ads, although Facebook has since reversed its ad ban for pre-approved crypto firms, while still maintaining a ban on Initial Coin Offering (ICO) advertisement; Google made a similar move several weeks ago.

Also read: Cobo, a Beijing-based crypto wallet startup, has closed a $13 million Series A funding round in its bid to expand its services overseas