DappReview published its 2019 insights on the decentralized app (DApp) space in a Jan. 8 report. Just three blockchains accounted for 98.65 percent of total transaction volume, though EOS began to struggle in Q4 2019.

Decentralized app aggregator DappReview summarized the main events within the DApp ecosystem in 2019. The value of on-chain transactions amounted to $23 billion, with 1,955 DApps added during the year — bringing the total number to over 4,000. However, the firm notes that in terms of the number of users, the entire space continues to lag significantly behind any single widely used centralized app.

The previous year saw important breakthroughs occur, specifically through the emergence of decentralized finance (DeFi) and non-fungible tokens (NFT). Significant challenges abounded as well, with EOS suffering in the last quarter of 2019 as its network became strongly congested.

Though the smart contract platform started the year well, accruing $6.1 billion in transaction volume, it suffered a powerful hit to its reputation and fundamental statistics in early November. The EIDOS airdrop made the network all but unusable when it launched. Its mechanism distributed tokens to users who sent any amount of EOS to its smart contract, leading some to create multiple accounts and rent additional resources to participate in the airdrop — depriving everyone else.

This had a direct impact on the number of active EOS DApp users, which suffered a precipitous fall and failed to recover since. 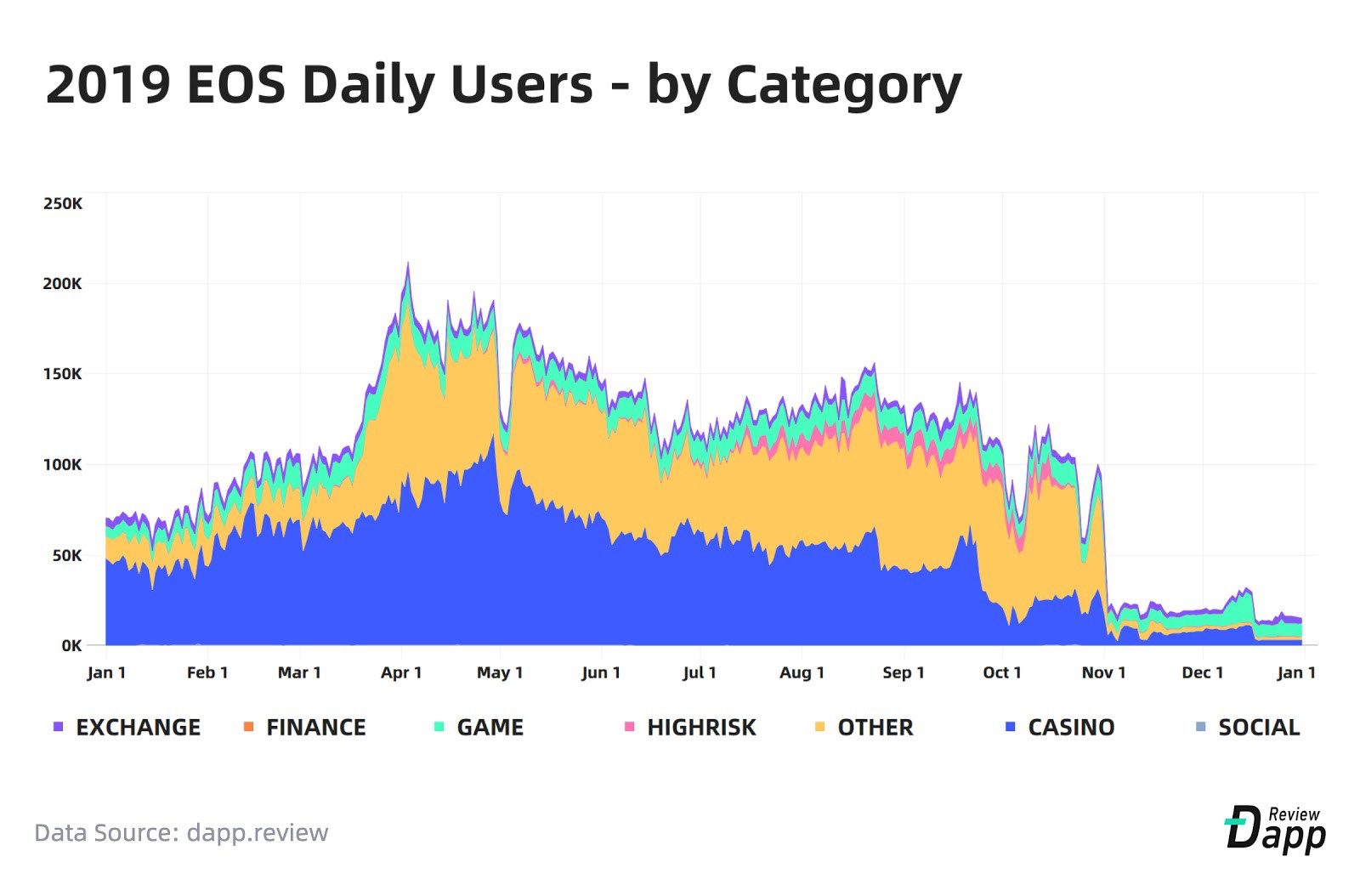 However, the analysts argue that the majority of these users were bots participating in online betting. Categories such as Exchange and Game showed similar activity levels, even increasing in transaction volume as the congestion continued. 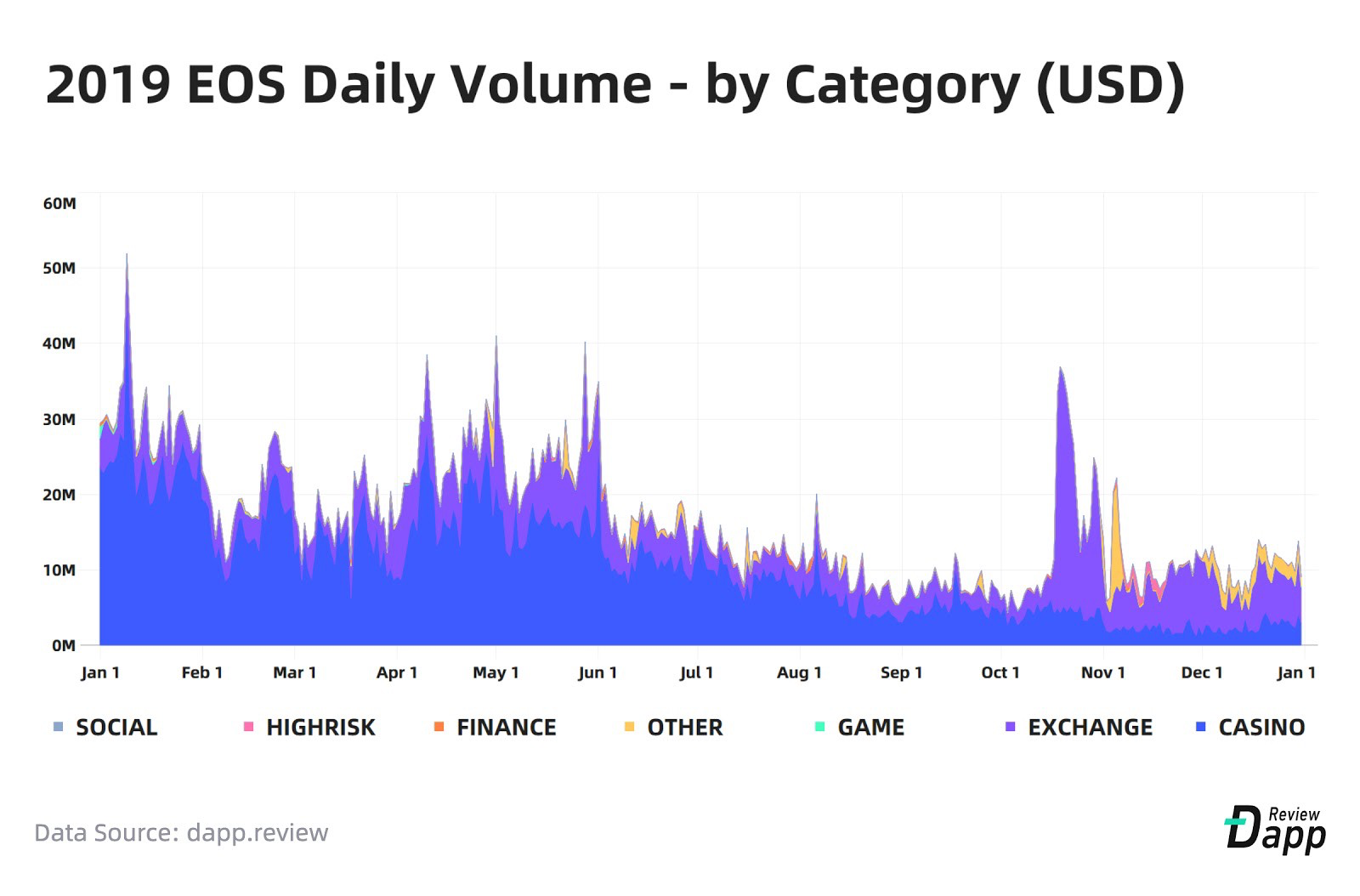 Nevertheless, the congestion had clear repercussions, such as popular game EOS Knights ditching the platform for its future version. DappReview notes:

“Blockchain games still have to face the cruel reality that the damage created by EIDOS will continue for 15 months, and the congestion of the EOS main network may be difficult to resolve in the short term. The existing users are gradually leaving and there are no newcomers.”

Ethereum the most diverse while Tron attracts betting DApps

As the first smart contract released live, Ethereum (ETH) is hosting a diverse range of DApps. The past year was characterized by the rise of DeFi, as several lending and derivatives solutions based on Maker’s (MKR) DAI stablecoin appeared. 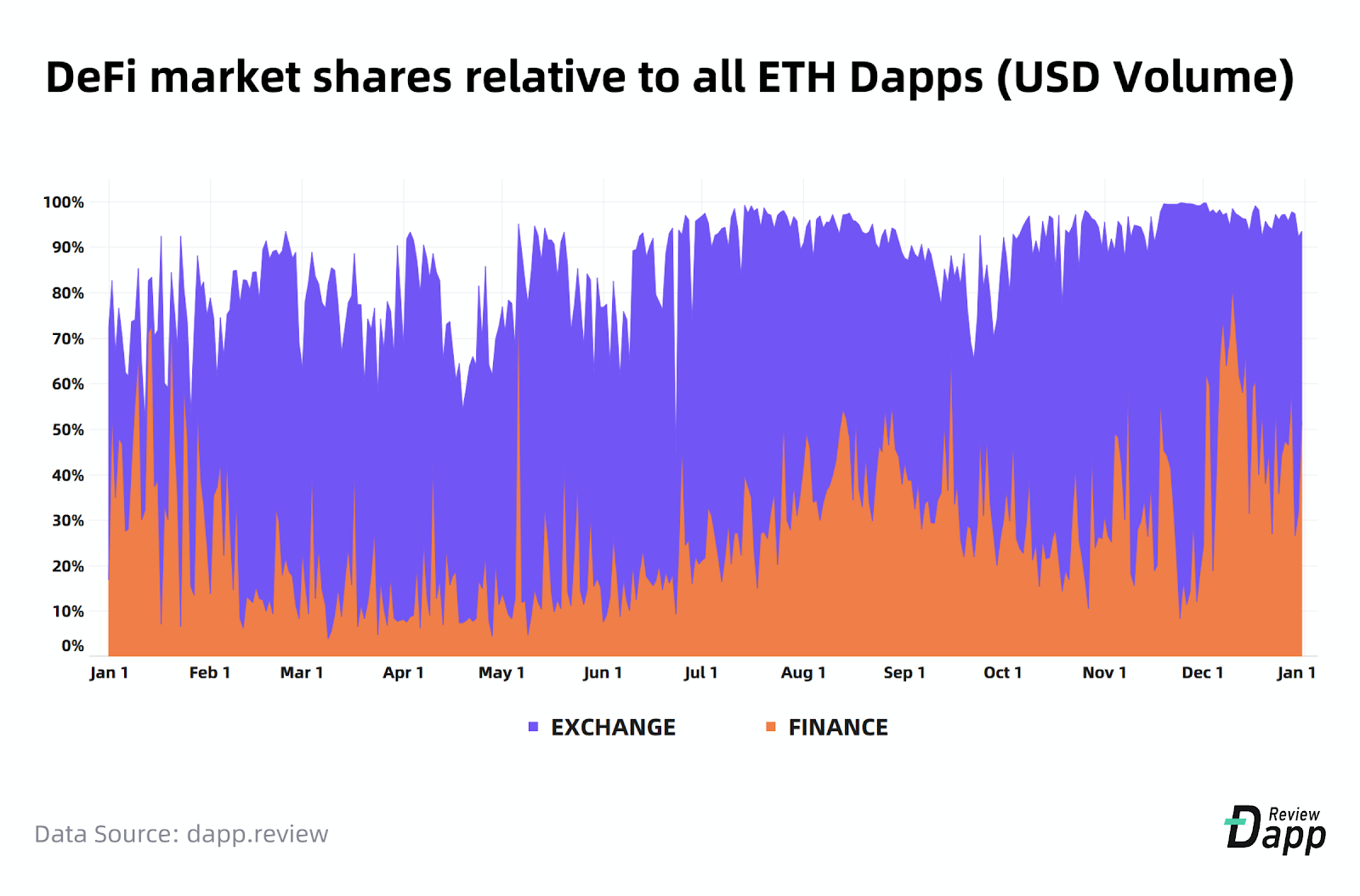 However, the report noted that the value locked in DeFi remains small even compared to other blockchain-based financial tools. Collateral put to staking is approximately five times larger, at $6 billion. Compared to the global debt market, estimated at $250 trillion, DeFi remains negligible.

Tron (TRX) registered the third-largest transaction volume at $4.4 billion, but betting DApps made up over 90% of the total — leading analysts to characterize it as “Las Vegas on the blockchain.”

Tron’s founder Justin Sun made several strong moves to diversify its offerings, such as introducing Tron-based iterations fo the Tether (USDT) stablecoin, investing in Poloniex, Dlive and other non-betting platforms. That appears to not have been enough to significantly alter Tron’s usage statistics for the past year.